Chelsea Estate Heritage Park is one of a handful of significant historic reserves owned and managed by Auckland Council.  For more information, phone 09 301 0101 or visit aucklandgovt.nz 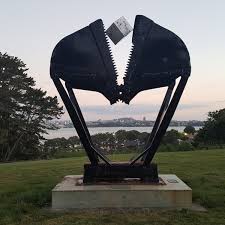 In July 2008 39 hectares of the Chelsea Heritage Estate was sold to a consortium that included the ASB Communities Trust, Auckland Regional Council, North Shore City Council and the New Zealand Government, a landmark achievement for both Chelsea Sugar and the people of the Auckland Region. The Chelsea Estate Heritage Park represents the largest coastal park in the city and supports wetlands, native forest, grassy promenades and diverse fauna and flora.

A sculpture by artist Bill Hayes and donated by Chelsea Sugar, was unveiled in September 2008.  The artwork was designed from a ships 'grab' (mechanical jaws), that gathered more than 8.5 million tons of raw sugar.

The Chelsea Estate has long been open to the public, and ensures that the coastal land and native forest is now protected in perpetuity. Every day there are walkers and trampers making their way through the numerous tracks, surrounded by native and exotic vegetation. Most tracks wind their way through the bush valley that Duck Creek runs down and exit at dead end streets on the boundary of the estate. At the head of the valley stand two large, old kauri (Agathis australis). A longer walk runs from the Chelsea Estate through to Kauri Point Centennial Park and into the Chatswood reserve. Along the way there are short excursions down to some of the quiet and secluded bays, such as Kendall Bay.  Walks vary in length  from 30 minutes to 2 hours return.

Waking dogs is permitted on the estate, it is recommended that out of respect, dogs be kept on a leash, particularly if there are other dogs and/or people walking in the area. Please ensure that dog waste is removed so that everyone has the chance to enjoy the park.

The estate has a diverse range of plant species. The main types are regenerating tanekaha (Phyllocladus trichomanoides) and kauri amongst old manuka (Leptospermum scoparium) and kanuka (Kunzea ericoides), relic hard beech (Nothofagus truncata), mixed hardwood forest in some of the gullies and coastal pohutukawa (Metrosiderous excelsa) and kowhai (Sophora microphylla) along the seaward edge.

The areas of hard beech are now reduced to just a few trees situated on the western margin of the property close to Pond 1 (situated highest up the valley), this area also contains the most kauri. Throughout the estate there is some invasion by exotic tree and shrub species, but these are not considered to pose a long-term hazard to the native trees. The North Shore City Council has engaged the services of ecological restoration experts to remove a number of the invasive plant pests.

For more information on both native and exotic New Zealand birds visit http://www.nzbirds.co.nz

- Fishing is strictly prohibited.
- The lakes are not suitable for swimming.
- Feeding the ducks bread is strongly discouraged as it causes algae bloom.
- When walking on Chelsea Sugar grounds, keep off the road and keep an eye out for trucks.
- Keep dogs on a leash when on roads and on walking tracks, as rat and possum bait may be present.